With the Google Form Notifications add-on, you can include dynamic QR Code and Barcode symbols in the email message that goes to the form respondent after they submit your web form. The images can be generated from static text or you can create dynamic images based on answers submitted by the user.

The basic syntax for adding QR Code images in emails is:

You can customize the colors and size of the QR code image by adding key-value pairs in the QRCODE function.

For instance, if you would like the QR code to have Indigo background while the code itself should be rendered in white color, the modified formula with the hex color codes would be:

The QR Code images have a default width of 300px but you can customize the image size with the width parameter as shown below:

For instance, if your Google Form has a question titled "What is your website address?", you can use a QR Code function like the one below to turn the user's answer into a dynamic QR code that, on scanning, will take you to the form respondent's website.

The basic syntax for barcode function is:

The includetext=true parameter would ensure that the text for data is included into the barcode image. 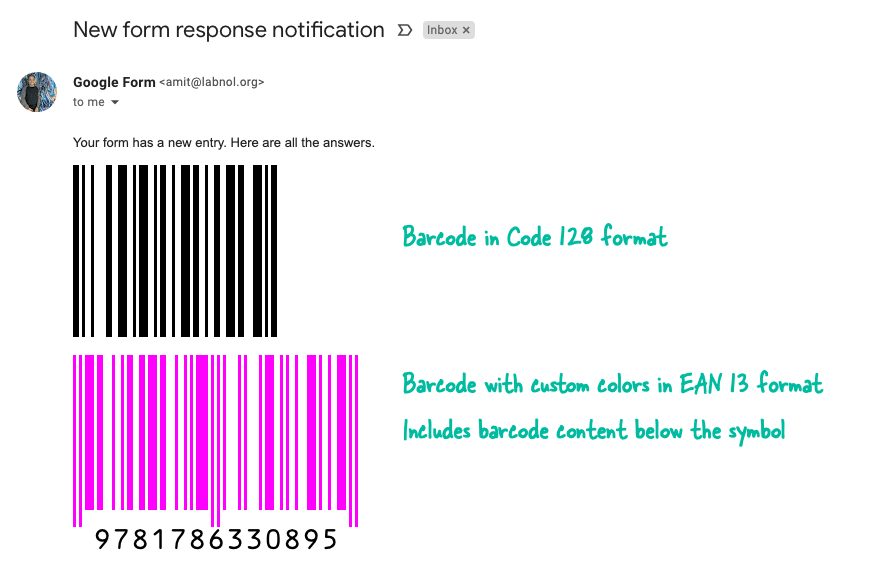 You can also modify the colors of barcode image using hex codes:

You can similarly modify the width of the Barcode image, the height of the bars, add borders, padding and more.

Please consult the documentation for a complete range of formats and options supported by the =BARCODE() function in Google Forms.